They say luck is what happens when preparation meets opportunity. Such was the case for an acrobatic 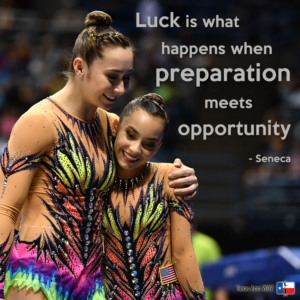 gymnastics pair from San Antonio, Texas, as they arrived in Wroclaw, Poland, for the 10th World Games. For non-Olympic sports such as acrobatics, the pinnacle of international competition is the World Games, held every four years in the year following the summer Olympics. The opportunity to compete in such an event is a rare one, indeed, and many factors must align for it to come to fruition.

Just over a year before stepping onto the floor in Wroclaw, Emily Davis and Aubrey Rosilier were finishing up successful seasons in different partnerships. Davis won the gold medal with her partner, Rebekah Jones, in the level 10 women’s pair division at the 2016 USA Gymnastics Championships in Providence, RI. Rosilier, meanwhile, wrapped up a strong two year partnership with Thalia Berry by securing a fourth place finish in the Jr Elite 12-18 women’s pair category at the 2016 World Age Group Competition in Putian, China. In acrobatics, though, it is common for partnerships to change season to season as athletes outgrow each other or move in different directions, so both girls returned to the gym in June 2016 uncertain about what their acrobatic future would hold.

Regrouping his team for the next two year cycle, Acrobatic Gymnastics of San Antonio (AGSA) Head Coach Vladimir Vladev had a vision for Davis and Rosilier, and it quickly took shape. The two picked up skills at a rapid pace and found that they had highly compatible personalities and approaches to training, which is critical in sport that has partners training together upwards of 30 hours per week. They set their sights on competing at the Jr Elite 13-19 level for the upcoming season, with a stretch goal of advancing to the Senior Elite level in time for the 2018 World Championships in Belgium.

Those goals would quickly change.

In March 2017, the retirement of fellow teammates Maren Merwarth and Jessica Renteria suddenly changed plans for Davis and Rosilier. Merwarth and Renteria had earned the USA berth in the women’s pair division to the 10th World Games by virtue of their finish at the 2016 World Championships. With their retirement, the field for selection of a women’s pair to compete at the World Games was wide open. Davis and Rosilier, along with Vladev, adjusted their plans.

After competing their first international competition together at the Geneva Acro Cup in May (the first international competition ever for Davis) and winning silver in the Jr Elite 13-19 women’s pair division, the pair came home and switched gears. They learned a new routine, choreographed by World Champion and Acro Army creator Arthur Davis III, and increased their skill difficulty to Senior Elite level. A month later, they competed their first Senior competition at the 2017 USA Gymnastics Championships in Milwaukee, WI, winning gold and being selected to represent the United States at the World Games. They immediately got back to work, meeting up with the rest of Team USA in California for a pre-Games training camp and arriving in Wroclaw at the end of July.

The competition in Wroclaw was intense, with top women’s pairs from around the world vying for one of only four spots in the finals. Davis and Rosilier had the “luck” of drawing the first spot in the first rotation, opening the Games with their stunning new routine to the classic Sound of Silence. After the second round of routines, they held on to third place and advanced to the finals, something that seemed quite a long shot a few months before. The unusual competition format, which called for all three routines to be competed in one day, was grueling but the pair kept up the pace, finishing in fourth place after the finals, the highest finish ever for a USA women’s pair at the World Games.

What did the girls think about this whirlwind of a year? “Being chosen to represent the U.S. at the World Games was a very exciting experience. However, it was very tough to progress so quickly in one year, from being level 10 to competing as senior elite. It definitely took a lot of dedication and a lot of hours spent practicing in the gym,” said Emily. Aubrey, too, expressed excitement over the once-in-a-lifetime opportunity. “I feel blessed to have been able to compete for the USA on such a big stage, and I hope that we honored Maren and Jessica’s legacy with a strong performance.” The girls both credit their coach for keeping them focused and prepared both mentally and physically.

Up next for the pair is the Pan American Championships in Daytona Beach, FL, Oct 13-15, 2017, followed by World Team trials at the National Team Training Center in Huntsville, TX in February. Their stretch goal of competing at the 2018 World Championships in Belgium is definitely within reach, and they are determined to bring home some hardware.