Acrobatic Gymnastics of San Antonio (AGSA) owner and head coach, Vladimir Vladev, recently received the highest level certification awarded by USA Gymnastics, Master of Sport. This honorary title is reserved for coaches who have demonstrated the ability to train and produce athletes to represent the United States at the highest level of competition.

Vladev, a member of the National Team Coaching Staff, has coached numerous award-winning pair/groups at both the national and international level. In 2016 AGSA sent 17 athletes to the Acro World Championships and World Age Group Championships, including finalists at the age group, junior and senior elite levels. Says Vladev, “This achievement could not have been possible without the help of all of our amazing acrobatic team coaches, the athletes that push themselves to be their best everyday, and the support of parents willing to sacrifice so much for the success of their children.” 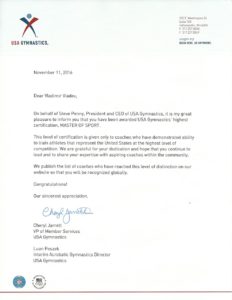 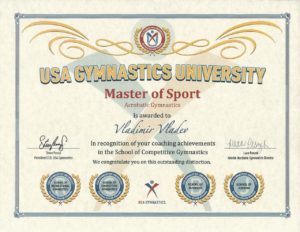