Fourth place finishes are often heartbreaking, athletes missing the podium by inches or by tenths, sometimes at the mercy of tie-breaking rules as in the case of Aly Raisman at the 2012 Olympic all-around competition. Such heartbreak was in abundance at the 2016 World Acrobatic Championships and Age Group Championships in Putian, China, this past April, when five of the Team USA pair/groups finished in that unenviable spot just off the podium. Fourth in the world certainly is something to be very proud of, but heading home without any hardware after coming so close was definitely disappointing.

One of those pair/groups, the Junior Elite 12-18 women’s pair of Thalia Berry and Aubrey Rosilier who train under Vladimir Vladev at Acrobatic Gymnastics of San Antonio and finished just 0.2 points off the medal stand behind Portugal, Great Britain, and the Netherlands, left China empty handed. Thalia’s mother, however, a UK citizen, had an idea.

Sara Berry remembered a story she had heard following the 2012 Olympics, about a small bookshop owner in Derbyshire, England, who had a special place in his heart for fourth place finishers. An amateur runner himself, David Mitchell had grown up admiring Olympic athletes of all stripes, no matter where they finished. After the Beijing Olympics he had the idea that the level of competition and the number of participating countries had increased to the point that three medal places weren’t enough to recognize the level of accomplishment. “Basically, I thought it was just time,” Mitchell said. “It’s so competitive now and the standards are so high.” He then took it upon himself to correct that wrong, commissioning and delivering custom, engraved medals, made of pewter rather than gold, silver or bronze, to some of the notable fourths, including Raisman. He plans to continue his mission following the 2016 Games in Rio as well.

Upon their return from Putian, Berry reached out to Mitchell, asking if he would consider sending recognition to her daughter’s pair. Since acrobatic gymnastics is not yet an Olympic sport, the World Championships is the pinnacle of competition for these athletes. Mitchell responded without hesitation and was excited to expand his reach. Such a gesture of goodwill between the UK and the USA touched both the athletes and their coach.

Berry and Rosilier did not compete at the USA Gymnastics Championships this June, both girls moving onto new partnerships for the upcoming season, but they were able to reunite over the weekend to receive their special medals. “This medal will always remind me of how hard we worked and how much we achieved,” remarked Thalia. “Thank you so much to Mr. Mitchell for his incredible kindness!” 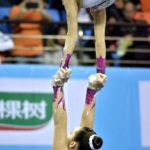 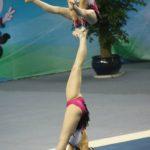 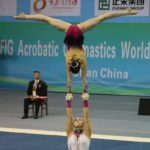 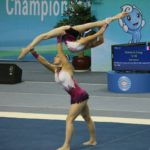 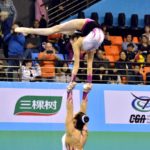