Hurricane Harvey left a path of destruction across the Houston metro area, and Baytown, located on the northern side of the Galveston Bay, was no exception. For the Texas Acro community, that meant that one of our own was under water: Texas Academy of Acrobatics and Gymnastics (TAAG).

The first time gym manager, Jennifer Stone, was alerted about potential flooding in the building, she was able to make it in time. Mats were stacked on elevated surfaces, equipment was moved and the spring floor carpet was rolled up and put out of the way. The second time, however, she wasn’t as lucky. At this point roads were impassable, staff and coaches were dealing with their own houses flooding, and the gym couldn’t be reached. By the time she and gym owner, Anna Smirnova, arrived to assess the damage, the news wasn’t good. Throughout the the facility, which had originally been a church, there was 8 inches of water, soaking flooring and sheetrock in every room. 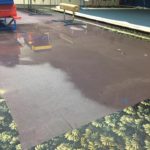 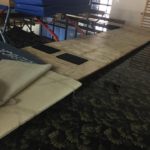 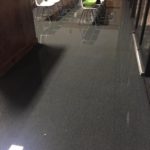 The effort to clean out the building began immediately, but it was painstaking work. All equipment and fixtures had to be moved out, flooring had to be ripped up and the bottom two feet of sheetrock had to be pulled off every wall. In some areas that took longer to reach, the mold spread all the way up the walls before the sheetrock could be removed causing even more damage. And that was just the demolition. Once cleared out, every room now required new flooring and every wall needed texturing and painting. Staff, coaches, parents and volunteers all pitched in, even while they were dealing with similar devastation at their personal homes. 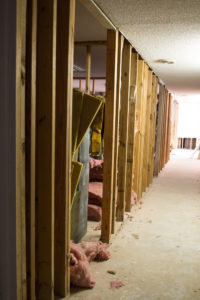 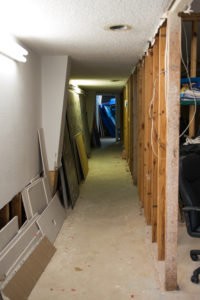 With all of the chaos and uncertainty of the situation, Smirnova had one primary concern: the kids and families that her gym served and employed. Of the 550 students enrolled, about 100 had flooded homes themselves. Coaches and staff who were struggling to regain footing were not getting a paycheck while the gym was closed. The community was devastated, and she knew that re-opening the facility as quickly as possible meant returning a sense of normalcy to children that so desperately needed it. 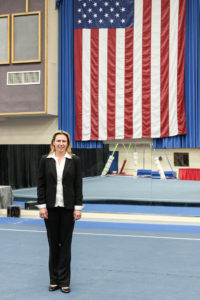 “We could not have done this without the help of all of the people that sent us support. I cannot thank them enough.” – Anna Smirnova

The primary focus, then, was getting the main gym area restored enough to resume classes and training, and in two and a half weeks, they did just that. Families called to say they would have to take a break while finances were tight dealing with the recovery effort, but Smirnova comped tuition when needed.

The effort was a community one, parents and families donating services and pitching in hours of manual labor. But the must humbling aspect to Smirnova was the compassion and assistance provided from the greater Acro community, with donations and cash being sent from clubs across the country. With tears in her eyes she said, “We could not have done this without the help of all of the people that sent us support. I cannot thank them enough.” Contributions were received from GAT, Texas Acro, Crescent City Gymnastics, Boerne Gymnastics, West Coast Training Center, ATA, and Paramount, and the Acro community at large sent love, support and prayers.

Four and a half months later, the rebuilding effort was still under way. The main gym was back in business, but behind the lobby and hallways were offices and rooms with bare studs, concrete floors and piles of equipment. As money ran out, repair work would stall, then be resumed when more came in. Stone commented, “It’s a process. It’s a LONG process at this point.” 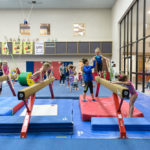 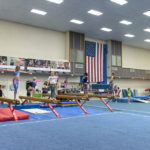 Cue a call from USA Gymnastics. In January 2018, ties had been cut with the former National Team Training Center at the Karolyi Ranch in Huntsville, and efforts were underway by the organization to secure new locations for developmental camps and events. For the Acro community, however, the timing was tough — less than two weeks away was the scheduled World Team Trials (WTT) event, a competition to determine the USA delegation for the 2018 World Championships and World Age Group Competition in Antwerp, Belgium. With flights and accommodations booked for athletes from around the country, the short timeframe meant it was next to impossible to relocate the event from the Houston area. And with deadlines looming to provide entry information to the World Championships, delaying the event was out of the question. So when ten days before the scheduled date for the competition Smirnova answered the call from Ryan Ward, the USA Gymnastics Program Director for Acrobatic Gymnastics, she had one quick response. Yes.

TAAG had no gymnasts scheduled to participate in the WTT, but Smirnova knew the community and many of the athletes participating. This event would be a pinnacle for many of the acrobats, the chance for which they had been training for years. Regardless of the massive work still left to be done in the facility, her immediate priority became those athletes and making the disruption to their experience as minimal as possible. She picked up the phone to call Stone, and the two got to work. 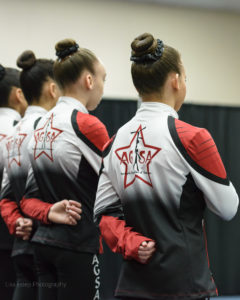 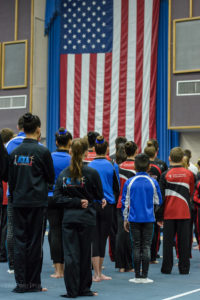 On Friday, February 2, 2018, five months to the day since Harvey finally released its grip over the people of Houston, acrobats from across the country marched onto the floor at TAAG and saluted the flag during the national anthem. The competition went off without a hitch, and the USA delegations were named for the World Championship events. “The staff, club, and all of the volunteers were incredible during the Acrobatic Gymnastics 2018 World Team Trials event.  Texas Academy of Acrobatics and Gymnastics has a phenomenal facility with equipment that is exactly what the sport of gymnastics requires,” said Ward. “I thank the entire staff of Texas Academy of Acrobatics and Gymnastics and each of the volunteers for allowing and helping USA Gymnastics host the 2018 World Team Trials event.”

Behind the mirrors and the flag, there is still work to be completed in the building, but the TAAG community is marching forward. Classes are back to full enrollment, some even with waiting lists, and teams are training for their upcoming seasons. In April, acrobats from across the state will convene in Baytown for the Texas State Championships, another milestone event, and the TAAG dedication and hospitality will undoubtedly be on full display again.